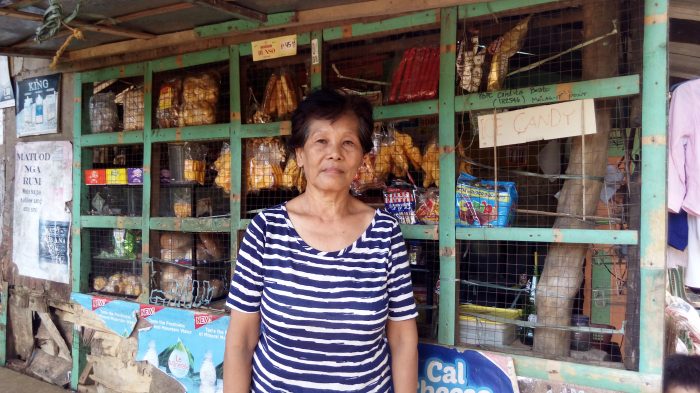 Tragedy seemed to follow Cristita. Four years ago, her husband died from kidney and liver problems. Her 30-year-old son, traumatized by troubles in life, could no longer work or even walk, sitting at home and rarely speaking. With her 26-year-old daughter unemployed, the burden of caring for her two children and one grandson fell on Cristita’s shoulders. She ran her own sari sari shop but only earned US$0.99 (PHP50) a day, making it hard to provide for her family.

When Cristita came across a group of neighbors gathering for the Transform program, she quickly asked to join. During the 15-week program, she learned skills such as making detergent powder and fabric conditioner and cooking snacks like banana cakes and puto cheese. Now, in addition to running her sari-sari store, she sells puto cheese to give her income a needed boost.

Earning an extra US$0.33 (PHP16.67) a day, she has so far saved a total of US$5.32 (PHP270), a modest but important amount. Unexpectedly, she was given the honor of being appointed president of her savings group.

Those around her have also noticed a physical difference. Her family and friends see her smiling a lot more than she used to, and Cristita herself recognizes her new attitude, saying that “attending VHL training really changed me from within.” Cristita was named the most transformed participant in her community and has proved herself to be a strong and tenacious fighter ready to overcome her difficulties.

“I would like to thank all the sponsors and staff of ICM for helping us by teaching us Values, Health and Livelihood. I have learned new ideas that will help me as a mother,” she said. “I never regret being a part of this program.”