Last year, the O family had the opportunity to visit Dumaguete. While on their ICM trip, the O family – 12-year-old Brandon, six-year-old Sydney and parents Andy and Christina witnessed the positive changes ICM’s Transform program brings to entire communities.  While the family was in the slum, working with participants of a Transform community, they were requested to keep their eyes open for medical cases that could be brought to ICM’s attention for possible treatment.  There, the family’s eyes were opened as to how easily cured medical conditions go untreated in the slums due to lack of basic finances.

Months later, at ICM’s annual banquet, Andy and Christina remembered those suffering individuals and were delighted to learn that their family could participate in ICM’s Adopt-A-Patient program. Adopt-A-Patient allowed donors to sponsor a child who, thanks to a partnership with Matilda Children’s Foundation, was coming to Hong Kong to receive life-changing treatment or surgery. 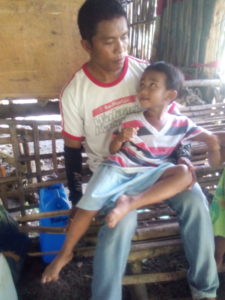 Andy and Christina explained, ‘We also appreciated the fact that our support was focused on one individual we could meet and put a name and face to.’ The program also encouraged the sponsor to visit and get to know the patient, who, so far from home, would likely be homesick.

After several months, the O’s learned that that the child they had been matched with, four-year-old Ryan, was coming to Hong Kong with his father, Arman, for his operation.

The O’s recalled the family’s first visit to the hospital, ‘Although we had been provided some basic background information before meeting Ryan and Arman, we were struck upon meeting Ryan at just how young he was (younger than our youngest child by a year). We could also see the extent of the injuries to his feet, the result of accidentally walking on burning garbage and plastic at the age of two.  Upon meeting, Brandon felt very sad for Ryan as he was so young and hurt at such a young age.’ 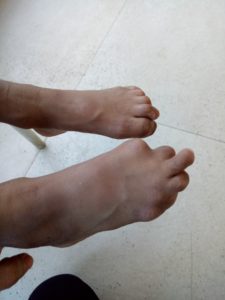 In his room at the beautiful Matilda International Hospital, Ryan was feeling uncertain.

‘It was natural for Ryan to be shy and reserved traveling so far from home to a foreign setting and meeting a group of people he had never seen before (and possibly the first Koreans he’d ever met!), but we were also aware that his injuries had also caused Ryan to be introverted and withdrawn in social situations.’

However, the young boy recognized that the O’s were his friends and over the family’s four visits, he thawed. 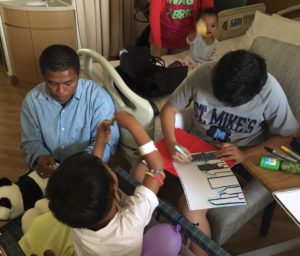 ‘From our first meeting, Ryan was shy and reserved – he wouldn’t acknowledge anyone without some prodding from Arman and he was poker-faced in terms of expression.  But over the course of the next visits, and particularly as he recovered from the pain of surgery and began walking with assistance, there was a terrific and notable change in Ryan’s behavior.  He was much happier and vibrant: he was playing around, laughing and smiling and high-fiving!’ 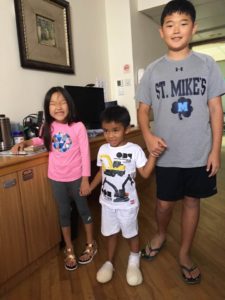 Without the O’s generosity, Ryan probably never would have been able to walk properly, complete his education and have a chance at fighting his way out of poverty.  In return, the O’s feel the opportunity of helping Ryan, ‘highlighted how lucky our family is in so many ways: most importantly, that our kids are healthy, happy, and increasingly appreciative of the responsibilities and opportunities before them.   We continue to hope that our kids understand they can and should make positive changes around them, even small ones.’ 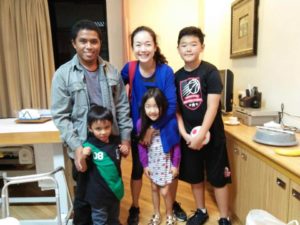 Thank you O family for choosing to change Ryan and his family’s lives forever.

In the lives of many that live on subsistent level, one medical crisis can wipe out any progress made in the fight out of poverty. ICM works with families to help them remove as many barriers to quality health care as possible. In 2015-16, ICM assisted 183 patients with surgical needs and 2,069 patients with non-surgical needs.

By Andy, Christina, Brandon and Sydney O, Friends of ICM