Trading the golf clubs for hope

When Raquel Hopton joined ICM as an summer student, she was confident that after her three months internship, she would be headed back to the USA to start her master’s degree. Five years later…Raquel is still in Asia and helping the poorest of the poor.

Raquel Hopton grew up in the Midwest USA and always thought she would become a professional golfer… but little did she know what God had in store for her.  She graduated from the University of Illinois with a degree in Business-Accounting and while most of her graduating classmates got jobs with large accounting firms in Chicago, she traded a professional career and moved to Asia to work with a charitable organization that helps the poorest of the poor in the Philippines.

The organization she joined, International Care Ministries (ICM), has been serving the ultrapoor in the Philippines since 1992. In partnership with community leaders from thousands of slum communities, ICM delivered programs that transform the lives of more than 100,000 destitute people each year. 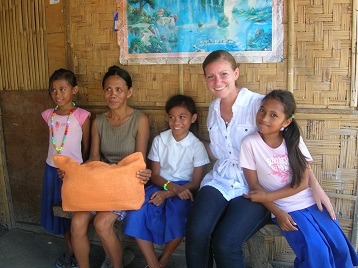 “After Typhoon Yolanda, the organization decided that something must be done to prevent disaster in the thousands of communities we serve across the country”, Raquel stated.  She witnessed that many of the communities they look after do not have access to electricity and the most frequent disasters were due to fires.  By using solar lights instead of gas lamps or candles, they would be able to cut down on that disaster risk dramatically.  Since the strength of their organization is to reach the people in the hardest-to-reach areas, they were able to deliver solar lights to those living at the “last mile” – places that can only be accessed by horseback, by crossing a river, by going over a rickety bridge, and hiking up a steep mountain.

Raquel sincerely says, “I believe that every person deserves a fair chance at having a successful life – no matter the circumstances they were born into”.  She also believes that the key to giving the ultrapoor that chance is to inject hope into their lives through a holistic learning approach. Beginning to understand the complex difficulties of those born into or subjected to extreme poverty encouraged her to act. She was blessed to have the chance to use her business skills in order to help those living in vulnerable places to live a life filled with more hope.  “If my time serving the ultra poor helped to save just one life or showed just one family that love is the most important thing in this world, then it is time well spent.”

“Take an inventory of your strengths and then figure out how you can use those strengths to serve. There is somewhere you can serve – maybe it is in your own community or office or maybe it is in a different continent. One thing you can do immediately is to support an organization that is making real change in the communities around you” is Raquel’s message to all who want to help but don’t know how to begin.

Raquel has been living in Asia for almost five years now and she’s looking forward to serving poor communities in the Philippines for a long time to come.