The students of Oxford Fall Grammar School have been taking mission trips with ICM since 2012. Each September a team of students travels to the Philippines to help those living in ultrapoverty.

In February 2015 students from the school presented ICM with a $5,000 cheque to help support two ICM Transform communities in the Bohol and Mindanao areas. 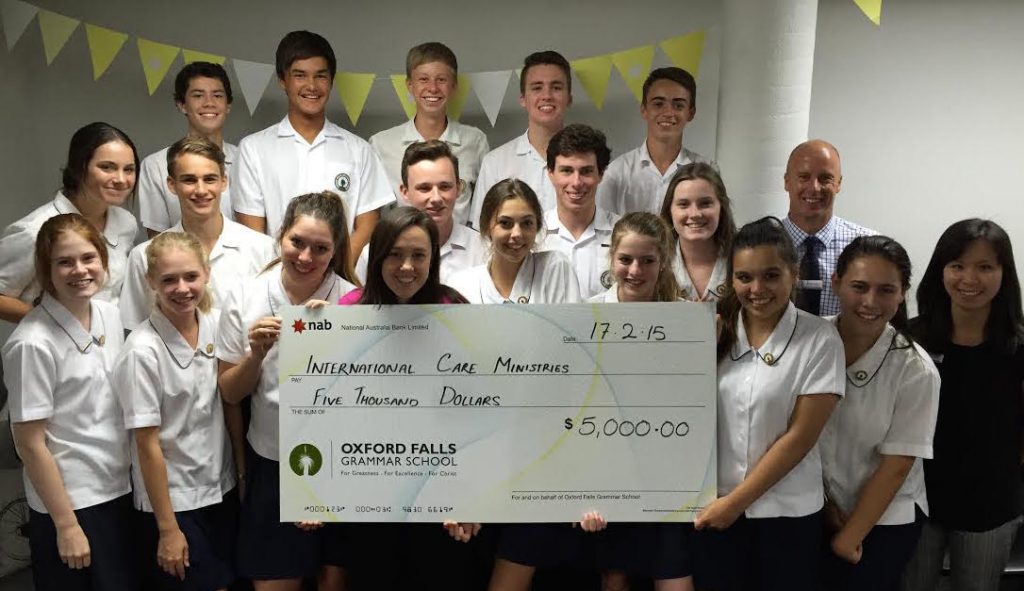 Community sponsorship not only provides help, it inspires hope and creates change for at least 200 lives! Their communities will receive Values, Health and Livelihood training. Each program is led by a pastor, with 6 counselors assisting the 30 participating families. With an average size of 5 people per family, this adds up to 200 people.

The money was raised by the Oxford Falls Grammar School community through a series of fundraisers such as car washes, bakes sales and individual donations.

Here are excerpts from students who have been on ICM trips before:

Sarah visited ICM communities in 2012. Here she is talking about building a Comfort Room – CR (toilet) and recalls: “It was crazy to think that something we take for granted, use every day, they didn’t have that. And I guess for me, the crazy thing was going over there, we went over there to help them, but they were helping us build it and getting involved. And being part of that community for that short time was definitely one of the things I’ll remember forever.”

In 2013 Matt went on an ICM trip. He says: “It was difficult seeing the confronting images you see. Like, you just walk down the street, you couldn’t get away from what you saw. It was inspiring, encouraging to better the whole country or at least better that little community you are in, or improve that one person’s life. Everything, just meeting the people, and like seeing that was someone’s life was difficult to comprehend for a while.”

One student Izzy who attended a trip in September 2014 says: “You go there to help them, but you leave with them having helped you.”

Catalina, who went to Bacolod in September, 2014 shares: “It gave us a new perspective on everything we do here. You learn about the values they hold. And if they mean we don’t need anything but God, they mean they don’t need anything but Him……. It really challenged me to what I was thinking and to recognize how much I have compared to them, and then to go, oh maybe I don’t need that, but I can donate the money instead, or if I can save that up and maybe I can sponsor a child, or help ICM build something for another community…”