The Kindness of Strangers

Pastor Paul Posong was heading to the shops with his family when he noticed a man in distress.

Seeing people in need is a regular occurance in Pastor Paul’s community in Palawan, the Philippines – but this suffering gentleman was unusual for two reasons: he was pushing a fantastic bicycle and Pastor Paul did not know him.

The gentleman was staying at a nearby resort and had decided to go for a bicycle ride. Unfortunately, the bicycle had broken down, and the foreigner had to push the bike back to the resort. This took longer than he planned, he had emptied his water bottle and he was very hot and thirsty. Needing a rest, the gentleman stopped his bicycle at Pastor Paul’s church and sat down to rest in the shade. Pastor Paul and his family could not help but notice how tired the gentleman looked and they offered him some water to drink. The stranger gratefully accepted.

It wasn’t ordinary water that was offered to the visitor, rather solar disinfected (SODIS) water. Over 2 million people in 28 developing countries use SODIS for daily drinking water treatment. Users fill a washed 2L plastic soda bottle with low turbidity water, shake it to oxygenate the water, then place the bottle outside for 6 hours (if sunny) or 2 days (if cloudy).  After that time, the water is now disinfected and drinkable.

The stranger really liked the taste of the water so he asked about it and Pastor Paul explained SODIS. The man found it very interesting. Pastor Paul also gave the man a Nutripack snack which he gratefully accepted. As he ate, Pastor Paul explained how the nutripacks are filled with fortified rice and help malnourished children gain weight.

Pastor Paul and his family decided they did not want to leave the man, and abandoned their trip to town. They stayed and chatted with the stranger, who was now looking less tired and more energetic. While his family talked with the gentleman, Pastor Paul repaired the bicycle.  They spoke of ICM and the church where Pastor Paul hoped to host ICM’s Transform program that would rejuvenate the community and boost the economy and health of 30 families at a time.  When the repairs were completed, the gentleman thanked the family, gave Pastor Paul his email address and went on his way.

Pastor Paul did email his far away friend. After a few email exchanges, the gentleman offered to donate 1million pesos (HK$173,500/US$22,390/AU$28,350)  for Pastor Paul to create a sturdy, concrete church that could comfortably host ICM’s Transform lessons and assist the community. Pastor Paul gratefully accepted. 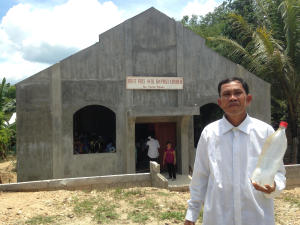 Last year, the gentleman came for a visit again, and the foundation for the church was laid. The church has since opened, and the Transform lessons have started within the community. 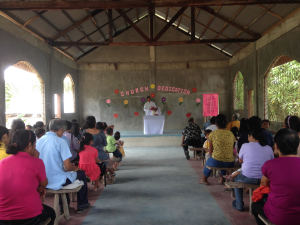