Pastor Laurel Lina Piang of T’boli, South Cotabato is one of the pastors in Koronadal who received a gift of 6,000 pesos. He has been serving as a community pastor for almost 25 years. Pastor Piang felt so blessed because this was the very first time for him to receive such an amount from an unknown patron. 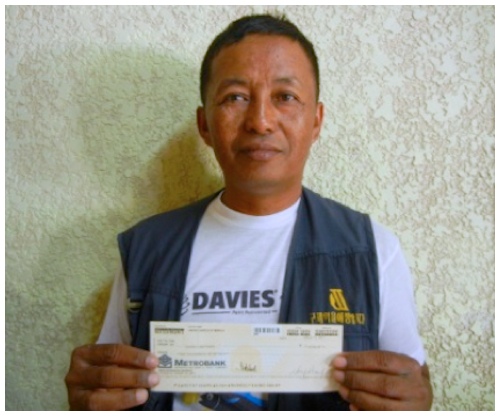 “This is the first time I was given a gift like this. I had no idea why I was called to the ICM office when one of the staff asked if I could drop by.  I went there and I was surprised when they handed me a check with my name written on it.”

In 1987, after graduating from a Bible School, he started a pioneer church in his hometown in T’boli. During that time, groups who were radically opposed to Christianity inhabited the area. Amazingly, after facing many challenges, Pastor Piang gained support and commitment from the villagers instead of harm. The church grew in number and is currently serving the whole community.  His greatest supporters are his immediate family. Through all the hardships and discouragement of working as a pastor within a slum community, he has never heard his family complain nor fight against his passion to serve Christ. He remembers clearly the times when his family had nothing to eat for dinner. All he could do was pray with them at the dinner table.

Pastor Piang never gave up but continued to obey God and serve him faithfully. Now, he and his family are working with the Manobo Tribe and teaching them basic literacy and numeracy. They are going to build a church there and the amount he received from Union Church will be used to jumpstart this project.  To everyone at Union Church, Pastor Piang wanted to say, “Thank you very much for the wonderful surprise! The joy I feel is immeasurable. This amount is truly a blessing and came at just the right time.”